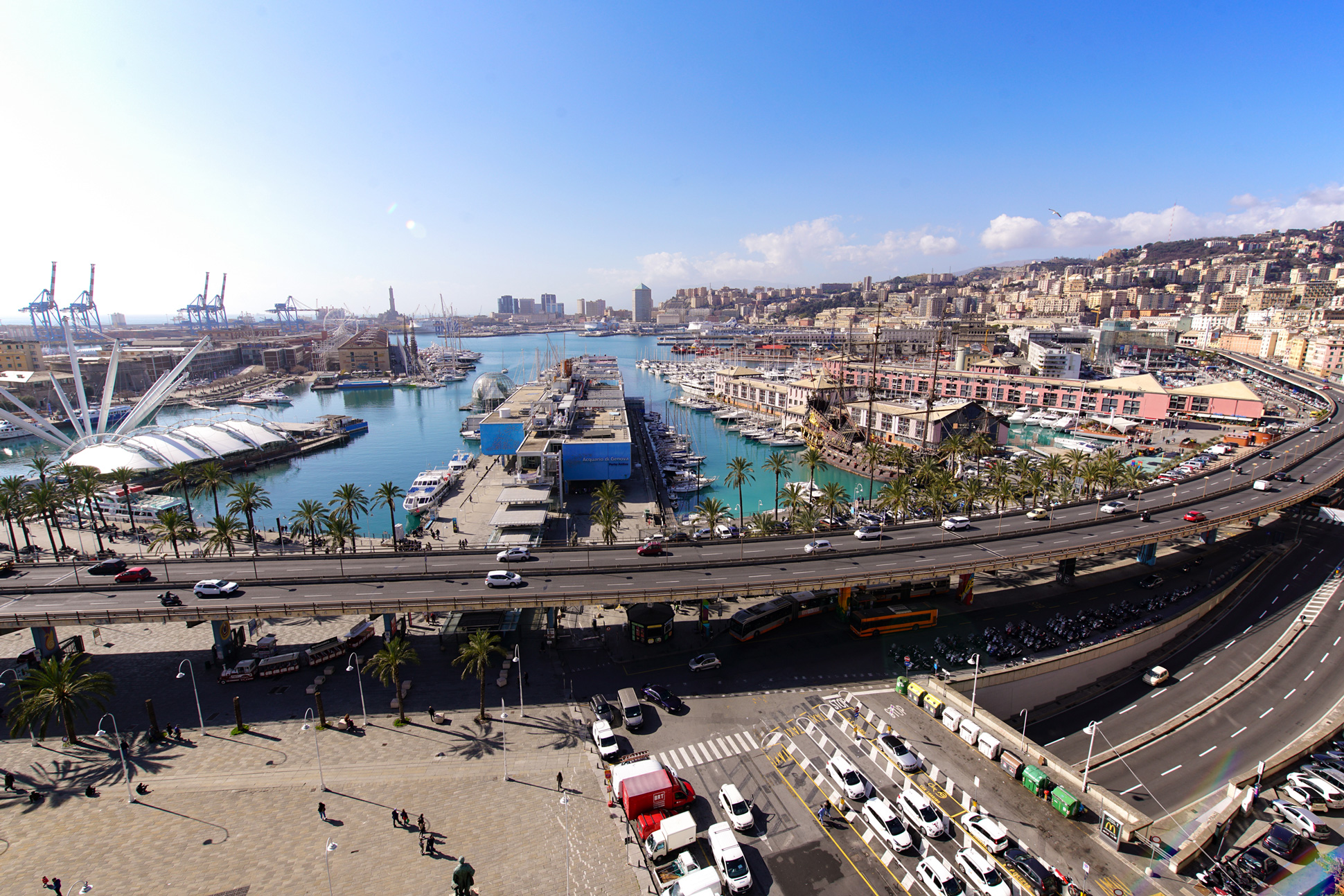 The former port area was redesigned by Renzo Piano in 1992 to celebrate the 500th anniversary of Columbus landing in America. Today, it has become the city’s tourist hub where you can stop for an aperitivo, grab dinner, shop, watch a film, go ice skating or take a dip in the swimming pool.  At the end of the dock sits the Magazzini del Cotone conference centre, with the Lighthouse of Genoa just across the water and the beautiful gulf stretching out into the distance. The hills form the perfect backdrop to this panorama, providing colour by day and lighting up the night.

As well as the Aquarium, there are numerous other attractions in this area: the Bigo Panoramic Lift (named after and shaped like the old dock cranes), the Biosfera, the Città dei Bambini (a fun, interactive museum for kids aged 2 to 14), and the Museo Luzzati, which is housed inside the old Porta Siberia building and is dedicated to the famous Genoese set designer.  The Porto Antico has become a bastion of leisure and entertainment for locals and tourists alike, with the area holding multiple events all year round.  The Arena del Mare and the Piazza delle Feste, which in winter is transformed into an ice rink, host all manner of shows, fairs, film screenings, festivals and concerts by Italian and international stars, lighting up the Genoese nights with sights and sounds of every genre. The Magazzini del Cotone is also a wonderful venue for international conferences, conventions and seminars.

Genoa’s aquarium, set against the backdrop of the Gulf of Genoa, is the biggest exhibition of marine biodiversity in Europe. Covering some 27 thousand square metres, it boasts 71 exhibits and over 15 thousand animals from 400 different species.  Visitors are treated to a thrilling journey exploring all sorts of sea creatures, from dolphins to sharks, penguins, manatees, jellyfish, seals, tropical fish and even Antarctic animals.  The aquarium is divided into three sections. The 40 large tanks, which faithfully recreate the animals’ underwater habitats, immerse visitors in the fascinating and little-known world beneath the waves. Next up are the 4 open-air tanks in the new Cetaceans Pavilion designed by Renzo Piano, and the 19 tanks of the Biodiversity Pavilion which are housed inside the Nave Italia, a real ship that has been renovated and docked in the Porto Antico.  This section of the Aquarium also houses the large touch pool where children of all ages can stroke the rays.  Your visit finishes with a fascinating reconstruction of the animals’ natural habitats. This includes not only sea creatures, but also rainforest and freshwater reptiles and amphibians. Since opening in 1992 to celebrate the 500th anniversary of Columbus landing in America, the Aquarium of Genoa has welcomed more than one million visitors every year. For information on prices and opening times, please visit its website www.acquariodigenova.it Tickets can be purchased at tourist information offices (Via Garibaldi 12r, Via al Porto Antico 2, Genoa Cristoforo Colombo Airport arrivals hall), online on the Aquarium’s website, and at the Aquarium ticket office.

Covering an area of some 113 hectares, it is one of the most extensive medieval old towns in Europe and has the greatest population density. Genoa’s historic centre is a maze of alleyways (caruggi) that unexpectedly open out onto little piazzas which, like the churches that flank them, are often linked to important noble families.  The spirit of Genoa lies in these streets, where flavours, scents, languages and cultures mix and mingle. To this day, the city centre remains a melting pot.

Its narrow spaces are squeezed onto the strip of land between the hills and the sea. Here, the pride of Genoa's wealthy merchants and nobles gave rise to splendid dwellings, some of which are now open to the public as museums where you can admire art collections that have been built up over many centuries.  Among these tightly packed buildings, where the windows are so close that they almost touch, different architectural styles sit side by side. The medieval walls will provide the foundations for a 14th-century building, while Gothic loggias have today been transformed into trendy bars. In Genoa’s historic centre, the present is quite literally built on the past.  It is a place where time almost seems to stand still. Aristocratic palaces and splendid churches are interspersed with independent shops that have been there for over 100 years, and that today are still rustling up specialities according to ancient recipes or crafting products using centuries-old techniques. Genoa is simply bursting with these old stores, with the street names themselves often calling to mind a past that revolved around artisan businesses and guilds – Via degli Orefici (Goldsmiths’ Street) and Vico del Ferro (Iron Alley), for example. Glance upwards at each crossroads and you will spot the magnificent votive shrines that were gifted by the ancient guilds to light up the streets at night. The oldest parts of the city are best seen on foot: it’s great fun losing yourself among the little lanes and wandering through areas bustling with life. If you prefer, you could join an organised tour to see the churches, palaces and monuments in more detail. Themed tours are also available, covering topics from the Genoa of De André to the medieval city.